Plan a Trip with Us

Journey through Spirituality following the footprints of our Kings 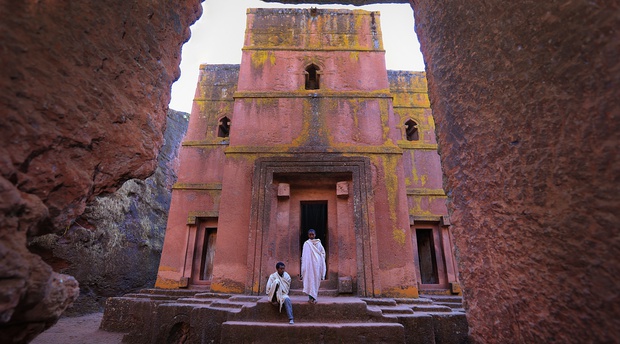 This itinerary takes in the five sites on Ethiopia’s Historic Route including the Semien Mountains National park, but can still incorporate some road journeys, such as driving between Gondar and Axum, to take in the stunning scenery of Lima Limo and the Tekezze Gorge. Also, from Axum, we could proceed to Hauzien to explore some of Tigray’s rock hewn churches, flying back to Addis Ababa from Mekele. Another possible extension is to the Afar Region, the Danakil Depression, the salt mines and the volcano at Erta Ale, which would take 3-4 days from Mekele, from where one would fly back to Addis Ababa.

The order of places visited in this itinerary reflects the current Ethiopian Airlines flight schedules, which may change, as may flight times. Please note that visitors arriving and departing on Ethiopian Airlines qualify for a substantial discount on domestic flights.

Title: Journey through Spirituality following the footprints of our Kings:

Day 1: Arrive in Addis Ababa; met by Source Ethiopia Tours representative at the airport and transferred to the hotel. In the capital, we explore the sites including the National museum, Entoto Park, Markato and the others. We also organize authentic traditional cooking experience with local market visit at our home. The visitors will have hands-on experience cooking with us, enjoy meal with our family and finally experience the splendid coffee ceremony with the lovely stories.

Addis Ababa is the capital of Ethiopia since 1886/1887. It’s a cosmopolitan city with representatives from over 80 nations and nationalities; and housing more than 70 Embassies. The population of the city is close to 6 million and the elevation varies from 2300 – 2800 meter above sea level.

Day 2: Following early breakfast, fly to Aksum (about an hour and half flight), check –in to the hotel. Refresh for a while and start exploring the ancient city of Aksum – the Stele Park, the compound of St. Mary of Tsion, the tombs of Kaleb and Gebre Meskel and the so called palace of the Queen of Sheba.

From around 200 BC to 700 AD, Akum was the seat of an Empire which extended across the Red Sea to Arabia, traded with India and China, minted its own coinage, had its own alphabet and notational system, constructed great engineering works and dams and which was reckoned by the 4th century Persian historian Mani to be one of the four great powers of the ancient world, alongside Persia, China and Rome.

Day 3: Today we take a flight to Lalibela; seat of government following the decline of the Aksumite Kingdom in the 7th Century. After lunch, we will visit the first group of the rock churches.

Lalibela and its magnificent Rock Churches :

At the end of the 12th and beginning of the 13th centuries King Lalibela of the Zagwe dynasty built a series of rock hewn churches – the New Jerusalem. Now rightly acknowledged to be one of the wonders of the world.  There are 11 churches in the town named after him, with others in the surrounding countryside.  All are still in use today. The churches are divided into two groups, the division being the River Yordanos or River Jordan.

It is estimated that the churches took 25 years to construct – for the Kingdom based on Roha (later renamed Lalibela) to have kept a large work force engaged in economically unproductive labor for such a long period means that it disposed of a large economic surplus and was very wealthy.  The area then was clearly fertile and agriculturally productive, whereas now deforestation and population pressures on the land have reduced its productivity.

Day 4: Drive through the beautiful countryside (40 km one way) to the monastery of Yimrhane Kirstos built by the cousin of King Lalibela late 11th and early 12th Century.

The Monastery of Yimrhane Kirstos:

Built by the king of the same name before the reign of King Lalibela.  The church is constructed inside a cave, in Axumite style, similar to the 7th century monastery at Debre Damo in Tigray, with alternating levels of wood and stone. A 40 km trip from Lalibela followed by a 20 -30 minutes hike brings you to this beautiful church, the finest example of its kind in Ethiopia.

Day 5: Fly to Gondar and then set off north to Debark, a distance of about 100 km (around 2 hours’ drive), heading up through clouds and mist.  In Debark we pay the park entrance fees and pick up the game scout.

A UNESCO World Heritage Site since the late 1960s, the Simien Mountains National Park presents perhaps the most dramatic scenery in Africa. Its great volcanic plugs, formed some 40 million years ago and eroded over the years into fantastic crags, pinnacles and flat topped mountains, “the chess pieces of the Gods”, as one writer described them. There are many peaks over 4000 metres, and Ras Dashen at 4620 metres is the highest in the country and the fourth highest in Africa.

Day 6 and 7: We get deep in to the National Park and explore the unique wildlife (flora and fauna) and the stunning landscape.

Gondar Castles: The Camelot of Africa

Gondar was the imperial capital from the 17th to mid-19th centuries, and the Royal Enclosure or Fasil Gibbi, provides visitors with an idea of what it must have been like in its heyday.  Within the compound are the castles of various Gondarene Emperors – extensive renovation has been and is still being carried out – along with a banqueting hall, stables and churches.  About 2 km from the town center is the bath of King Fasilides, where at Timkat (Ethiopian Epiphany) a nearby river is diverted to fill an area the size of a small swimming pool.  Worshipers plunge into the cold water in a re-enactment of the baptism of Christ in the River Jordan.

Day 9 and 10: Today we drive south to Bahir Dar (180 km, 3-4 hours’ drive) through the beautiful countryside with photo stops and experience authentic culture of the locals.

The City of Bahir Dar:

An attractive town, well laid out with tree lined avenues and with the blue of the lake in the background. From here we explore, leave by boat for the Zeghie Peninsula, which is known for its 14th century, round, and grass roofed churches and their magnificent wall murals. We visit two churches, Betra Mariam and Ura Kidane Mehret, walking through dense forest with lots of bird life, before returning by boat to our hotel for lunch.

The next day, make an excursion to the Blue Nile Falls, some 30 km from the town, or undertake a city tour. From where we get down from our vehicles, a 20 -30 minute walk brings us to the falls themselves, which are at their most spectacular during and after the rainy season (from about June to January).  Here the Blue Nile, which contributes 85% of the main Nile flow, starts its long journey to the Mediterranean.

Day 11: Fly back to Addis Ababa and final departure.

Arrive in Addis Ababa; met by Source Ethiopia Tours representative at the airport and transferred to the hotel. In the capital, we explore the sites including the National museum, Entoto Park, Markato and the others. We also organize authentic traditional cooking experience with local market visit at our home. The visitors will have hands-on experience cooking with us, enjoy meal with our family and finally experience the splendid coffee ceremony with the lovely stories.

Addis Ababa is the capital of Ethiopia since 1886/1887. It’s a cosmopolitan city with representatives from over 80 nations and nationalities; and housing more than 70 Embassies. The population of the city is close to 6 million and the elevation varies from 2300 – 2800 meter above sea level.

View   As featured in The Independent
Hanukkah Injera Nachos